Flip #3 and #9 and it looks pretty accurate!

If Stafford had been in Dallas the last 5 years he would have a ring. Maybe 2

And I don’t understand how people under-value Dak. I guess it’s because he has a great line and Zeke but he’s still a very good QB. 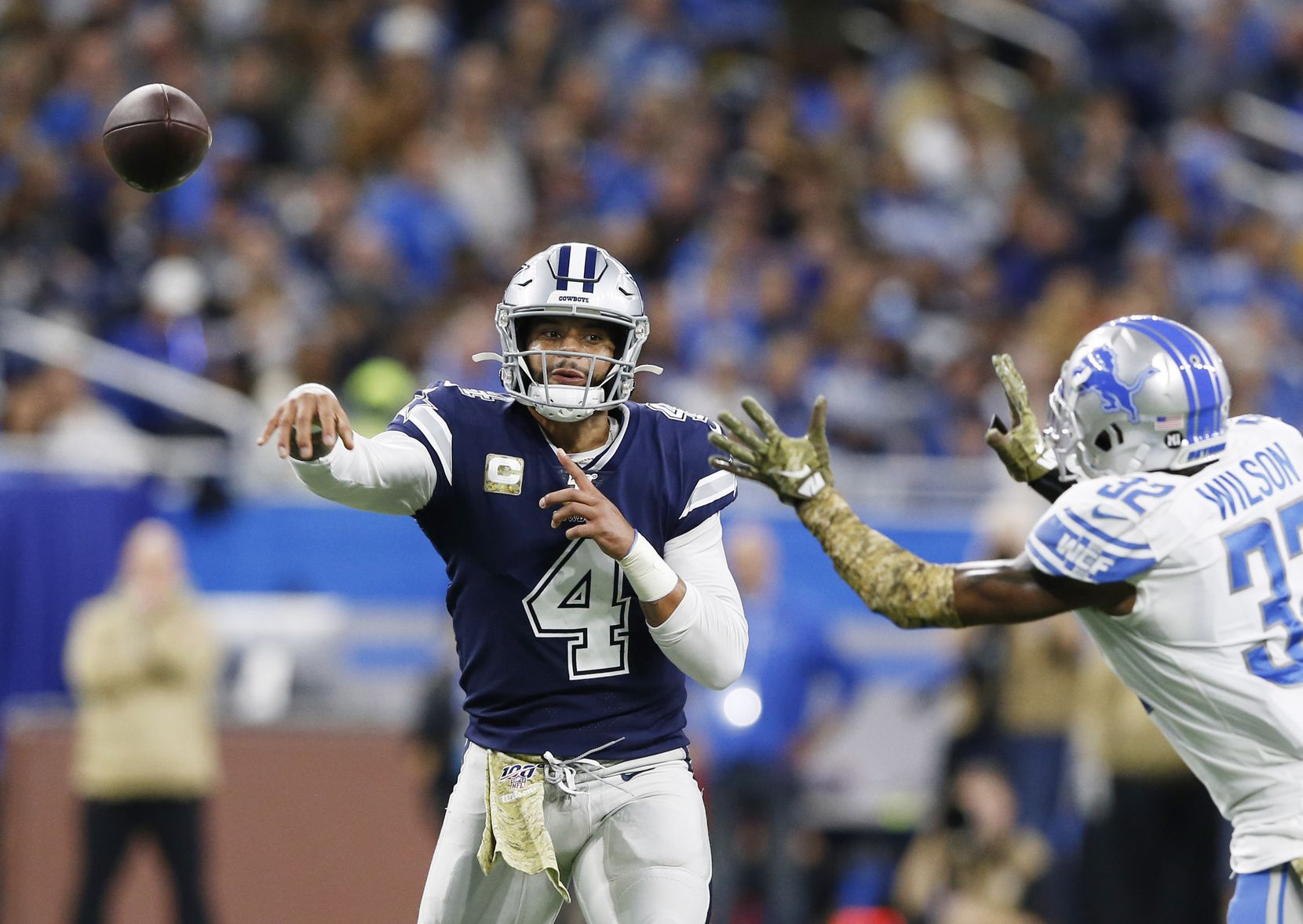 FILE - Cowboys quarterback Dak Prescott (4) attempts a pass as Lions safety Tavon Wilson (32) closes in during the first half of play at Ford Field in Detroit on Sunday, Nov. 17, 2019.(Vernon Bryant / Staff Photographer)

With Kellen Moore as his play-caller, Dak Prescott had an outstanding season in which he displayed a lot of improvement. Prescott was extremely aggressive in 2019, pushing the ball 20-plus yards downfield on 12.8% of his passes — by far the most in his career. That downfield aggressiveness combined with better lower-body throwing mechanics led to Prescott being more accurate than ever on deep passes, as his 52.6% adjusted completion rate on deep throws — a career high — ranked third among quarterbacks with at least 30 attempts of 20-plus yards. Prescott’s productivity could have been even better if his weapons didn’t have a season-long case of butterfingers — 36 of Prescott’s passes were dropped in 2019, the most in the NFL. On top of his passing ability, Prescott is also one of the most gifted runners at the position. He finished third in yards per attempt (5.3) and avoided tackles (14) among quarterbacks with more than 25 carries, according to PFF . An injury to his throwing shoulder toward the end of the season caused a decline in his play, but he played well enough otherwise that the Cowboys should be confident in his future. They need to pay this man before he gets even more expensive.

The Brees ranking is absurd. He’s still a top 5 QB. Ranking Murray, Newton, Tannehill and Cousins over him is beyond ridiculous. Stafford and Ryan shouldn’t be ranked over him either.
Tough to rank Brady because he had zero help last season but I’d bet he’ll bounce back big time next season with all those weapons (whenever that is). Stafford at 9 is about right.

My hot take is that Watson is overrated. He’s good but top 5? I just don’t see it. He makes too many low percentage throws and holds on to the ball too long.

I would take Stafford over Dak any day.

Its hard to compare Jackson and Stafford. Different skills. Its almost like you need a sub category for guys like Jackson. He’s rated above Stafford for his legs, not his passing.

The rest above him, I can see an argument (that I may or may not agree with).

This list is a bit odd because it doesn’t really say if it was based on just last year or the players skill or success or what?!?! So, if it’s just off last year, then Stafford only played half a season, so he shouldn’t barely be on the list. And if it’s based on careers then Brady and Brees should be up near the top.

This list is a bit odd because it doesn’t really say if it was based on just last year or the players skill or success or what?!?! So, if it’s just off last year, then Stafford only played half a season, so he shouldn’t barely be on the list. And if it’s based on careers then Brady and Brees should be up near the top.

Yes, I think the list is way to heavily skewed based on last year alone

That’s a myth. Jackson was an incredible passer last season, it wasn’t just his legs that earned him the accolades. His much improved passing is what took him to the next level because that was the big question about him prior to last season.

Stafford is rated appropriately, lets not overrate him.

I don’t think Jackson is an incredible passer. This is not me saying he’s bad. Just not incredible. I think he’ll continue to improve. And combined with his legs he’s a lethal option as is. But Stafford is a better pure passer to me, no question asked. Jackson ain’t making a living in the pocket. Also, for the record I didn’t mean to say Stafford was BETTER than Jackson. Just hard to compare was my point. I do think Stafford is better than Dak though. The rest we could debate and I could see a case for. Like Matt Ryan, I think he has a good argument, but I can’t say I’d rather have him than Stafford. Same with Wentz.

He had an incredible passing season, I wouldn’t say that he’s an incredible passer. My point being that he has turned into much more than just a running QB although part of what opened up their passing game was his legs and the threat of him running.

Do not get the Dak love at all. He’s had some near Joe Montana level talent around him almost his entire brief career. The amount of hardware on guys like Brady, Brees, Ben below him are legion and Dak hasn’t won shit with one of the best RB’s in the league and probably the best oline in the league and Amari Cooper. He’s taken advantage in spots, but you’d have to really suck not to.

The fear Jackson instills in a defense and the running game they have outside of Jackson makes the pass defense swiss cheese. Not trying to clown him at all, but now that Stafford has the danger of Swift/KeJo, methinks he’ll see some serious open receivers too.

Didn’t someone post some stats on teams with a strong running games and how it doesn’t really matter when it comes to open receivers!!!..I ask because it seems like someone did but I can’t really remember if they brought really all that strong of evidence or not.

I would take Stafford over Dak any day.

Its hard to compare Jackson and Stafford. Different skills. Its almost like you need a sub category for guys like Jackson. He’s rated above Stafford for his legs, not his passing.

Agree 100% Dak is not near Stafford talent wise. Lamar as a passer is not close to the passer Stafford is and Lamar’s season in 2019 was a great one, but not because he is a better QB …His game is not something that can be compared to Stafford and vice versa .

I still just don’t understand the list, is it a list of QB’s you want leading your team, maybe??? …idk.
Anyone can make up random lists.