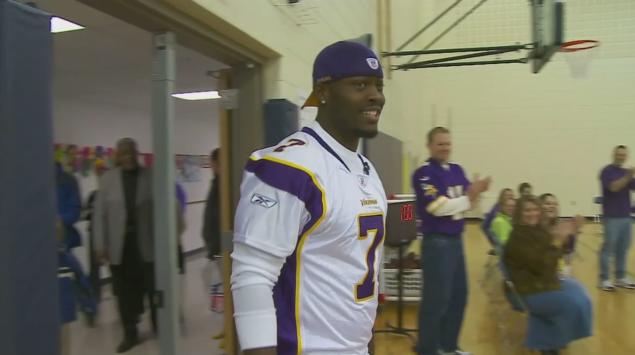 Former NFL quarterback Tarvaris Jackson’s car crash was caused by him losing control of his vehicle while driving 70 mph in a zone with a 30 mph speed limit, according to a police report obtained by TMZ.

Jackson was fatally injured in the car crash last week in his hometown of Montgomery, Alabama.

The crash reportedly occurred around 8:50 p.m. on April 12. Per TMZ, Jackson lost control while going around a bend in the road at 70 mph, slammed into a sign post and crashed into a ditch. The road was reportedly not well lit.

When emergency personnel arrived at the scene a few minutes later, Jackson was reportedly unable to give a reason for the crash. He was then transported to a local hospital and later pronounced dead.

Jackson was reportedly not tested for alcohol or drugs at the scene, but was wearing his seatbelt at the time of the crash.

Jackson’s body was laid to rest on Saturday in Montgomery, with mourners restricted to only 10 people in the church due to the ongoing coronavirus pandemic.

The 36-year-old’s death came as a shock for the NFL world, particularly for his former teammates on the Minnesota Vikings and Seattle Seahawks.

TJack… you will be missed. Praying for your family…Love you man.

6,010 people are talking about this

Jackson played a full decade in the NFL, mostly as a back-up quarterback. He got a Super Bowl ring during his time with the Seahawks. After retirement, Jackson moved into coaching as a quality control coach at his alma mater at Alabama State, then as quarterbacks coach at Tennessee State.