Should Mahommes have won MVP of the Superbowl?

What do you guys think, should Mahommes have won the MVP of the Superbowl last night?

Who was more deserving?

I think it all comes down to nobody else was the clear favorite so the QB gets the nod. Someone really has to step up for it not to be the QB and in this game I don’t think there was anyone else.

Who else could it have been?

One guy on ESPN radio this morning said the clear-cut MVP should have been Damien Williams.

My buddy was saying the same thing last night. I think Bosa was the best player on the field and would have been MVP last night had they won…they didn’t…so it went to Mahomes.

I was having this convo as they were mounting their comeback… I asked if Mahomes can shit the bed for 3 quarters and still get MVP. The consensus answer was, well who else is going to get it. I suppose it was a true team effort.

Don’t you know all winning QBs get the fame and glory??? It’s always the handsome, most popular guy in the school/team. lol

As long as the winning QB didn’t go 9 for 38 with 142 yards and no touchdowns, that QB of the winning team will more than likely win the MVP of the Superbowl.

And to the NFL, I am sure they would rather have Mahomes win the SB MVP and not Damien “Who’s that dude?” Williams. 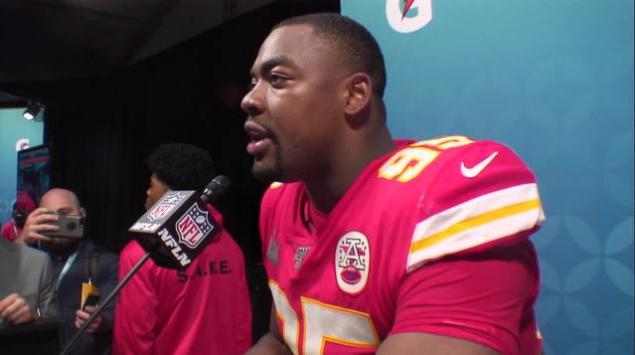 This one is a bit of a shocker.

Two days after winning the Super Bowl, the Kansas City Chiefs announced their MVP for the 2019 season.

The honor goes to All-Pro safety Tyrann Mathieu. The Chiefs announced the MVP result on Tuesday along with naming wide receiver Mecole Hardman as the team’s Rookie of the Year. 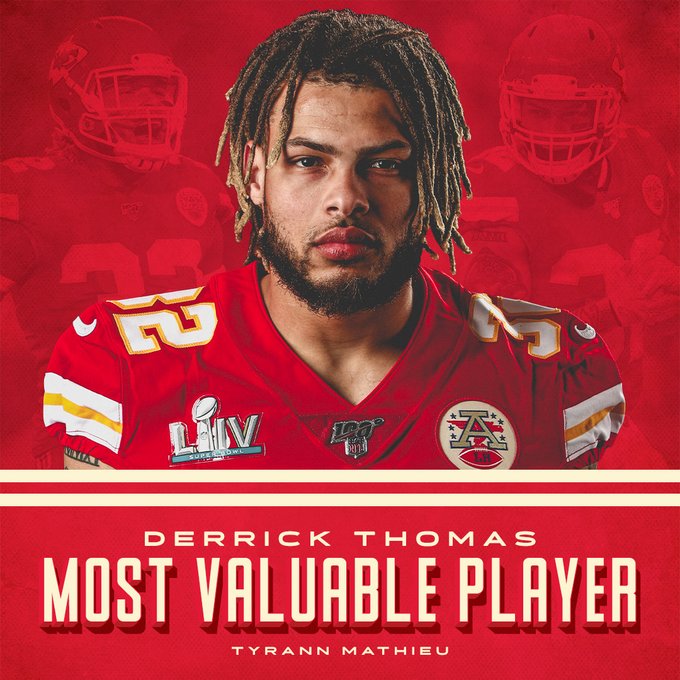 1,666 people are talking about this

These awards are based on player and coach votes. According to Pro Football Talk, the votes were tallied the time same players and coaches cast their Pro Bowl ballots, which means prior to the playoffs.

Calling the vote a shocker is no knock on Mathieu. The seventh-year pro had a fantastic debut season with the Chiefs, earning All-Pro honors for the second time while tallying 75 tackles, four interceptions and two sacks.

He’s beloved and respected by his teammates for his leadership and his play on the field.

It’s just that Mahomes is arguably the best player in football and a quarterback like the game’s never seen. There’s no rational argument that he’s not the most valuable player on the Chiefs.

The Chiefs voted a player not named Patrick Mahomes as the MVP of their Super Bowl season. (AP Photo/Charlie Neibergall)

But MVP fatigue sits in among voters. Just ask LeBron James. That appears true in the Chiefs locker room as well after Mahomes won the honor last season.

Mahomes did miss a pair of games after after suffering a dislocated kneecap during a Week 7 win over the Denver Broncos. That he came back so quickly and strongly from what initially looked like a season-ending injury could actually be used to bolster his “most valuable” status.

But Mathieu is obviously an outstanding player. That he’s thrived in the league after being kicked off his college team at LSU for substance-abuse policy violations and has candidly discussed mental health struggles makes him a favorite among teammates and fans.

After experiencing the lows of sitting in jail for a 2012 marijuana arrest, Mathieu can proudly boast a team MVP award on a Super Bowl champion.

I would say no , Damien Williams or someone on the D-Line …
Mahomes has to know and I would think be real hungry for next season . The Chiefs won this game not playing at near what they are capable of , yes SF… Defense is pretty damn good but Mahomes played some bad ball , bad throws in situations that did not call for them …The deep pass to Watkins on the side line was great , a couple of key scrambles …but nothing that made you say wow…When the other team lost because they were inept and were a huge reason you won, and not so much what you did yourself …It really can not taste as good as it could . In these games the MVP rarely stands out .

I suppose it was a true team effort.

Everyone knows it’s not a team game and that it’s the QB who wins and loses the game.

If you looked at that game in it’s entirety, and how Mahomes played, you could honestly make an argument that a good 20 QBs in the NFL would have won that game playing for KC. He played slightly below mediocre.

I told my daughter at the end of the game that Mahomes would get MVP but he did not deserve it. Told her Damien Williams did. I still believe that. But as someone already said QB’s get the nod most of time just because of position. I also think it fits the narrative the league wants surrounding Mahomes. He was very pedestrian in that game.

Chris Speilman in one of his podcasts mentioned some of the things he learned going into media. The first thing was; teams or jersey colors aren’t what sells, Quarterback do.