Tom Brady and family have moved to Connecticut, suite at Gillette Stadium cleaned out

Report: Tom Brady and family have moved to Connecticut, suite at Gillette Stadium cleaned out

Tom Brady Determined To Keep Playing: ‘I Know I Still Have More To Prove’ 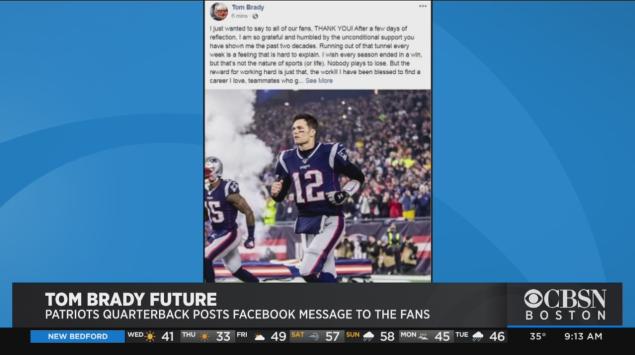 It’s going to be a long offseason for New England Patriots fans.

Ahead of longtime quarterback Tom Brady becoming a free agent for the first time in his career this March, rumors continue to swirl about the six-time Super Bowl champion’s next career move.

Brady has made it fairly clear that he doesn’t want to retire in 2020, but that doesn’t mean he plans to stay with the Patriots. Adding fuel to the fire on Tuesday is a report from local sports radio station WEEI’s Greg Hill on the Brady family’s current whereabouts. After listing their Brookline, Massachusetts, home for sale in August, the clan has seemingly fully relocated to a new home in Greenwich, Connecticut — a cool 3-hour drive from Gillette Stadium.

Hill also reported that the Brady family suite at the stadium, where wife Gisele Bündchen would watch games, has undergone a deep cleaning, seemingly in a way that “perhaps it has never been cleaned out before.”

Several analysts and NFL insiders have pointed to the Los Angeles Chargers as a possible landing spot for Brady this offseason. Patriots owner Robert Kraft, however, has said his “hope and prayer” is that the league veteran stays with the only NFL team he’s ever played for — or retires.

Brady himself has said that he loves playing for the Patriots, Kraft and head coach Bill Belichick, but that he’s unsure what the future holds. His home in Greenwich is less than an hour-long drive from MetLife Stadium, home of the New York Giants and Jets, and a two-and-a-half-hour ride to Lincoln Financial Field, the home stadium of the Philadelphia Eagles.

Brady will turn 43 in August.

Love to see him go to the Raiders as they debut in Las Vegas. The casino’s may offer Brady some cash on top of what Oakland offers. Nevada is an income tax free state so Brady would benefit from that too. Not far from home in San Mateo, California too.

San Diego might fit and they are moving to LA so Gisele could maybe find work. Problem is if you have to drive 10 miles it takes 3 hours.

Maybe we can offer him the head coaching job and bring him back to Michigan…he has New England ties.

What the hell did they do in that suite that would require “deep cleaning”?’

Would love to see Brady play elsewhere …If I was Tom I would not . Why tarnish the perceived GOAT QB status . We know the Patriots are contenders with any QB with a pulse and if Belichick were to succeed and Tom falls on his face that could severely tarnish his tenure …Or vice versa (not that I think so ) If he could win one elsewhere with San Diego …His doubters (me included) would have to eat a boot . It would be fun to watch him try.

What? Dollar you need to delete your post due to so many inaccuracies. 1st- San Mateo is not close to Las Vegas, 550 miles which takes 9hr to drive it. 2nd- San Diego already moved to Los Angeles in 2017 3rd- the only time it takes 3hrs to drive 10 miles in LA is when there is an accident on a freeway at rush hour. NFL normally plays on Sun thus no rush hour.

Played college less than an hour away, has a rapport with Patricia. We have a very nice set of outside receivers that Brady likes/needs and didn’t have in NE this year, plus a solid receiving/blocking TE and Amedola could be back in the slot. Stafford’s salary for the next three years is a bargain (lower third for a trading team), if his back is healthy, could get a nice little haul in trade.

This isn’t a knock on Stafford, he’s easily the best we’ve had and he’s never had anything better than an average defense or average running game to work with and usually much worse than average. I have no problem moving forward with Stafford for the next 5-10 years, but sometimes you just need a change.

I think Brady is done in NE. Something is in the works. My guess is he will be a Charger.

just has to see it in writing!!

If Brady came to Detroit he would be a backup. Get a clue people. I could see him going to SD as Rivers looks done and the rest of the team is a good nucleus. Oakland has a decent QB.

Belichek would likely go get Dalton and win with him, unless his spy gate 2 gets him banned.

Sorry I got your panties up in a bunch. First, Vegas is way closer than Greenwich, Connecticut and I am pretty sure he won’t be driving. He is very close to his family and they live in the Bay area. My second point should say “have moved” so YOU ARE CORRECT! but you act like he will be only driving on Sunday. He will be happy to know he doesn’t have to drive to practice the rest of the week so he owes you many thanks for negotiating that into his contract. LA traffic sucks and you can’t spin it any other way.
You didn’t rip on me for him becoming our Head Coach so maybe you agree with that one, although it was made in jest to link the NE ties.
Sorry, I don’t take the comments on this site that seriously, so I will not be removing my post.

Sorry, I don’t take the comments on this site that seriously, so I will not be removing my post.

I see nothing wrong with it. Leave it up.

Wherever Brady goes I suspect he will buy or rent a condo near by.

Agreed, the Pats have proven they can be successful without a top notch QB and Brady has only proven he can achieve greatness with the Pats so far. He will need to be very careful about selecting his next destination and needs to realize that if he demands the type of money he “deserves” as a top QB that he will limit what the team can do to help him. Also he is an aging player who has shown a decline overall the last couple years although losing Gronk etc… definitely contributed to it.

I can’t see him going to a bad team or more accurately a team that doesn’t have offensive talent. He is not going to sign with the Bengals or Miami just because they throw a bunch of money at him, more likely he will go to a team like the Chargers or Rams that have a good amount of weapons on offense but need better QB play and leadership.

Brady adopting the 'twang. That’d be a sight lol.

Not to mean the AFC south is an easier division to win than the AFC west. But the west would offer more work opportunities for his wife.

It’ll never happen but I’m sure he’s thought about it with his buddies over here and the literal God status he would have if he pulled it off. One can dream I guess.